The Satisfyer Pro 2 next generation might look a lot like the original (and cost the same) but I usually like the Satisfyer brand (probably one of the biggest names in suction toys at the moment).

The Satisfyer brand has 3.8/5 on Trustpilot after 100 reviews and 4.5 stars after over 40,000 reviews on Amazon. The company was the first to really drive popularity for affordable air-pulse technology like this. They weren’t the original but they’re certainly the top of the game for suction toys.

The reviews for the toy itself are generally very positive but the delivery and customer service let them down. If you do decide this is the toy for you, I would suggest purchasing from a third party (I’ll include links below).

I’ve played with their other models but (for the sake of anyone who hasn’t used the older ones) I’m going to review it as an entirely independent toy (and we’ll look at the differences for those who have the previous version).

So what did I think, does this suction-based toy suck?

That’s my one bad pun. I promise.

You place the small body-friendly silicone over your clitoris and switch it on and the toy creates a suction vacuum to stimulate your clit without actually touching it. If you haven’t tried clitoral stimulation like this before I highly suggest trying it out.

The Satisfyer brand is synonymous with suction toys and as I’ve used the previous version of this oral sex simulator before I hadn’t expected to see anything new but I was pleasantly surprised.

They’ve added more specific intensity control. We’re slowly moving away from a single button to cycle through intensity (I’ll never understand why this was so common) and now we have a +/- button design which is much, much better.

It’s also more discrete than older models (which I’ll get to in a moment) and (while your mileage might vary) I found the fit was a lot more snug and comfortable with this model.

I found myself comparing this to the Womanizer series quite often. A different brand and the original pusher of suction toys like this and while those might be a little quieter and the battery life is better – if I included the price tag I’d have a hard time faulting this one.

The Packaging and Box

My delivery was discrete and unmarked and (even if it wasn’t) I think the actual product packaging itself is fairly plain. I’m pretty sure even if this was just left at my door none of my neighbors were really going to give it a second look.

It actually looks a bit like a showerhead now I think about it. No complaints, I wouldn’t put it on display as a piece of artwork but it does the job. 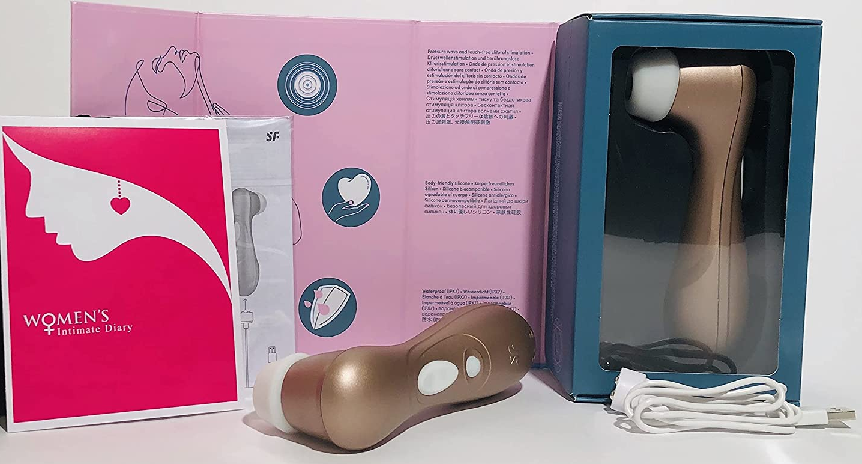 Inside the box, there’s not a whole lot of unnecessary stuff.

My Experience and How I Reviewed It

I purchased the Satisfyer Pro 2 Next Generation to see what the big hubbub was. I trusted the company and got enough use out of the older model (some might say more than enough) to try the upgrade. 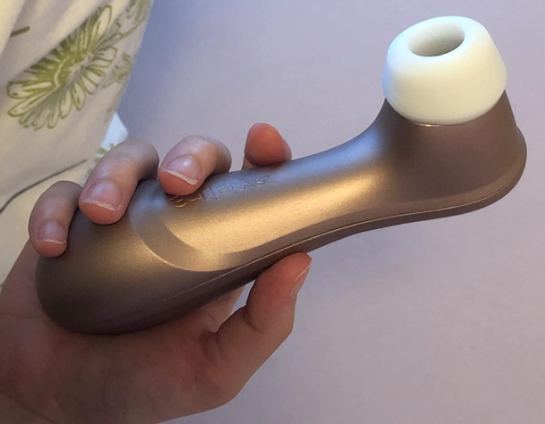 I hadn’t actually intended to review it assuming it would be the same thing in different packaging but there’s enough of a difference here to warrant a closer look.

So I spent several days giving it a closer look. You know, for you guys. It’s a thankless job but someone has to do it.

How the Satisfyer Pro 2 Next Generation Compares

The suction cup is made from hygienic and silky silicone. I’m not allergic to Latex myself but this is not a place I’d like to have a bad reaction.

The next-generation model is a lot more discrete than the originals. They’ve removed the individual LED light and now the power button itself is the indicator. It’s dimmer than the original (which could stand out a little too much) and they’re also using a new engine by the sounds of things.

The Satisfyer Pro is not the quietest toy around but it’s far from loud. To get much quieter than this in a suction toy you need to go a lot higher in price tag towards the Womanizer series and it’s not that much of an improvement.

Waterproof (and a Bonus)

While it’s not uncommon for solo toys to be waterproof most of them tend to perform a little worse. The Satisfyer Pro actually performs better in the water. The suction is just that extra little bit tighter and the soft silicone head doesn’t have an issue holding its breath.

It can be used in the shower or even fully submerged in the bath.

I actually don’t know how long the battery lasts because it hasn’t died for me yet. I always seem to be done long before it is so while there’s no huge glaring issue there’s a potential problem.

Because the battery is rechargeable you don’t need to start stealing from the kid’s toys or the TV remote – but you also can’t easily swap the battery. If you’re not keeping up with the charging you’re going to have to plug it in and then wait because it won’t work while plugged in.

Whether or not this becomes a problem probably really depends on how good you are with charging your devices. I’m… a B+ at best but I still didn’t run into any problems.

The device reviews themselves are wildly popular (take Amazon for instance) but the company gets a bit of bad feedback on Trust Pilot for their customer service.

There are some mixed reports of device failure and a problem with the refund process so while I like what they do, I don’t know that I’d suggest buying one directly from them. Note: I didn’t have any problems myself but I’ve seen a few problems mentioned by others.

Instead, I’d make sure you’re ordering from a shop that will handle the returns process themselves. That way you just skip any potential problems.

Apart from having the worst name for a female sex toy (what the heck were they thinking?), it’s not hard to draw a comparison here.

Technically the Satisfyer brand completely copied the Womanizer idea but I find it kind of hard to fault them. They made a lower price alternative which (at the time) also did a better job.

If we compare the latest model to the latest model… I’d say the edge probably has to go to the Womanizer if the price doesn’t matter. It has a better battery, stronger engine and it’s quieter but you really are paying for those improvements (literally).

If you know this type of suction is for you (and you can afford more than double the price) I’d suggest going with the Pro40 instead. Guaranteed orgasms and (with the longer battery) longer sessions.

Older Satisfyer Pro vs Next Generation

There’s really no point in even trying to get one of the older models but I don’t know if I would upgrade if you already have an older model.

The main changes are:

The biggest improvement is the extra control of intensity. For me, this is a big deal but if you’re already familiar enough with the older model to know the intensity cycle you might feel a little let down by the upgrade.

With the Satisfyer Traveler… the clue is kind of in the name. A travel-sized model, it’s smaller and comes in a tiny little case so you can tuck it away when you’re on the move.

The only reason I would suggest the traveler over the Pro 2 Next Generation is if you’re frequently on the move and short on space. The new model really isn’t that big or hard to travel with and the improved engine, control and battery is an easy trade for a slightly bigger size.

Unless you basically live on the road I find it hard to justify getting a traveler.

Cleaning and Storing the Satisfyer Pro 2 Next Generation

I have more than enough toys to clean and they have to be really good for me to contend with a complicated cleaning process.

Luckily, this Satisfyer model is an easy one. The nozzle comes off easily and you can clean it off with some warm water and soap (though I would avoid using scented soap when possible). The rest of the toy can be wiped down if needed as the entire device is waterproof.

It doesn’t come with any particular store short of the simple box it comes in. The device is pretty sturdy however and there’s nothing really that’s going to break off easily so you can throw it in a drawer without worrying too much about it getting damaged.

I’m not going to tell you this is going to replace every other toy in your collection. The reviews for the Next Generation model speak for themselves and it’s certainly a contender but there’s nothing completely mindblowing here.

The Satisfyer Pro 2 Next Generation is a solid contender for a budget choice. If it was the only toy you were going to get and you could afford a bigger price tag this is not the one I’d go with. If you’re looking to add a clit sucker to your collection without breaking the bank – this is certainly a solid choice.

Is the Satisfyer Pro 2 Next Generation Waterproof?

Yes. It’s even better in water.

It’ll work in the shower or completely submerged underwater. Because of the suction, it’s one of the rare toys that actually functions better underwater.

How Many Settings Does it Have?

11. As someone who really enjoys being able to control levels of pressure waves I really appreciate the levels of control and the +/- option means not having to cycle through all 11 intensities.

Yes. After the initial charge, you won’t really need to worry about the battery too much.

Is the Satisfyer Pro 2 Next Generation Charger Magnetic?

Yes, it’s a magnetic USB cable. You can charge it from the mains or from another device (like a laptop or power bank).